Moon and Sun: A Selection of the Rubaiyat of Molana Jalal Al-Din Rumi 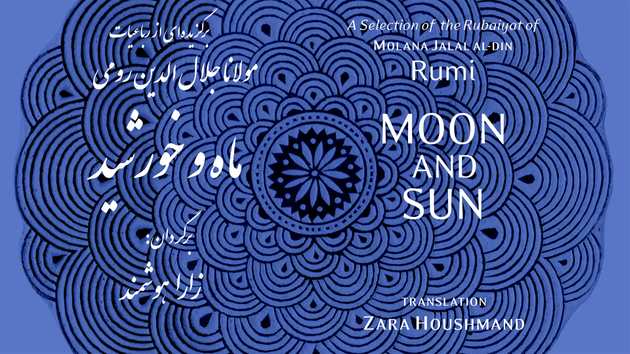 Introduction to the book

These rubaiyat, or quatrains, were composed by Jalal al-Din Mohammad Balkhi, known as Rumi, a thirteenth century Muslim theologian and Sufi mystic, and one of the greatest poets of the Persian language. They are a selection from almost two thousand such quatrains that, along with many longer ghazals, comprise the Divan-e Shams. These poems poured out during a period of Rumi’s life when he was intensely affected by his relationship with his spiritual mentor and soulmate, Shams al-Din Tabrizi.

Legend describes Shams—whose name means “sun”—as a wandering dervish, unschooled, an ugly man but charismatic. His own words, only recently made accessible in English, present a much subtler picture. He was an accomplished scholar who hid his learning, an iconoclast, and a fearsome enemy of all hypocrisy. He traveled widely in search of the great spiritual teachers of his time, but kept his distance from the dervish schools that would normally have accommodated such a traveler. He refused to beg, and instead earned a meager living at temporary jobs as he traveled.

His relationship with Rumi also defied categories, blurring the traditional roles of master and disciple. Rumi held the belief that at any one time, a single saint living in the world serves as an axis mundi, a center around which all spiritual energy revolves. He believed that in Shams he had found this saint. It is clear from Shams’s own teachings that he likewise saw Rumi as a saint, though one who had something to learn from him.

The synergy of their friendship was a mutually fueled fire of the spirit.

The Divan-e Shams is unusual in that its title, which means The Collected Poems of Shams, would normally indicate that Shams is the author. Rumi may have chosen such a self-effacing title to honor Shams, but he may also be implying that the poems arise from Shams’s voice speaking through Rumi, as the sun’s light is reflected by the moon.

Tradition also contributes to confusion over the true authorship of many of these poems. Some poems popularly attributed to Rumi were in fact written by earlier writers. Other poems now attributed to Rumi were not included in the earliest collections of his writing but were added a century later. Oral transmission plays a role in the confusion. Even when composed on paper, poems would often be memorized and passed on orally. Poems by earlier writers may have been included in the collection simply because Rumi recited them on occasion, and the original author was forgotten. It remains possible that some of these poems were actually composed by Shams.

Rumi was often described as improvising poetry spontaneously in the midst of the meditative whirling dance that was central to his practice. Although it is delightful to imagine poems birthed in the exuberance of an ecstatic ritual, these verses also conform skillfully to literary convention and are masterful exemplars of their kind.

The rubai, or quatrain (the plural is rubaiyat), is one of the oldest verse forms in Persian and has an unusually flexible meter. Examples of pre-Islamic rubaiyat expressing Zoroastrian aphorisms have survived, and it is also the oldest verse form used for the expression of Sufi thought in Persian. A rubai typically begins with an epigrammatic couplet, often opening with a provocative, attention-grabbing line. The thought pivots in the third, unrhymed line, serving as a bridge to the final resolution, which rhymes with the first couplet. Many poems repeat the same word or phrase after the rhyme word, creating an effect that may be as strong as a refrain or as light as a feminine rhyme.

Rumi’s poetry is exceptionally musical even by the standards of Persian verse. For example, he embellishes the typical AABA rhyme scheme with much internal rhyme that is not strictly required by the form. In these translations, I have not tried to duplicate the original meter or rhyme, but only to honor the musical quality of the original.

That Rumi chose the language of romantic love to address a vast body of poetry to his spiritual guide is explained by the confluence of Persian literary tradition and the ecstatically devotional, mystical path that Rumi and Shams traveled together. This coupling of romantic language with spiritual intent is seen also in the medieval European troubadour lyrics and the literature of courtly love. There is evidence suggesting that these themes originated in the East, and reached Western writers through the traffic of the Crusades.

One of the most difficult problems that arises in translating the original poetry is the use of ungendered pronouns in Persian. The pronoun oo can be rendered equally as “he,” “she,” “it,” or even “God,” depending on context. The ambiguity inherent in the language allows for multiple interpretations, and such meaningful ambiguity is a much prized quality in Persian poetry. In English, however, one is forced to choose. I have generally chosen the feminine pronoun where details suggest the image of a woman, or where the physical beauty of the beloved is emphasized, and varied the choices elsewhere as a reminder to the reader that there is more here than meets the eye.

Many of the masks that the lover assumes are shaped by convention rather than biography. When Rumi portrays himself as a wasted drunkard, or insane, he is drawing not on literal fact but on literary archetypes that were commonly used and yet deeply felt as true embodiments of the ideas and emotions being expressed. Rumi’s genius lies in his ability to inhabit such roles with both utter sincerity and playful skill as he conveys his very direct and deceptively simple reports of the heart’s struggle.